Nintendo DSi is an updated version of the Nintendo DS. The DSi has some Wii-like features, such as DSiWare in a similar style to WiiWare and includes an SD Card slot.

The DSi is a more streamlined and enhanced version of the DS instead of a completely new handheld. Maintaining the same dual-screen setup the DSi increases the size of each individual screen while decreasing the overall weight of the unit and making it thinner than the DS Lite. Furthermore, Nintendo has added a few new features to make it more competitive including a camera, built-in web-browser, and built-in audio decoding capabilities. Nintendo also emphasized digital distribution with the DSi as games can be purchased with Nintendo points and stored on SD cards. Not all DS Lite functions have been transferred over as the GBA expansion slot is completely removed, eliminating compatibility with certain DS titles such as Guitar Hero: On Tour that uses the expansion slot for a peripheral. 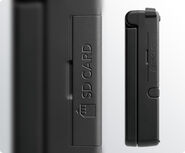